Chapter 2 : A Black Hole is a Fundamental Particle

This single idea that “A Black Hole is Fundamental Particle of Nature” has caused me no amount of angst in trying to communicate a revolutionary point of view. This view comes from trying to imagine what it would be like to fall inside the volume of an electron; to imagine being inside solid matter. Since writing this I have laid out more arguments towards this non-sensical point of view.

But more so I try to imagine technology that creates an artificial particle; or rather a single quantum system like atoms i n a Bose-Einstein Condensate. Then imagine such systems being entangled such that a wormhole between the two systems allowing for practical interstellar travel.

However in coming back to this I do feel that it does suffer a bit from ego inflation theory. That is the condition where a physicist sees a new solution that is a perfect fit and goes running down the street naked shouting Eureka. To everyone else I’m naked mad, but to me I see naught but the scientific story of creation.

It is at this point I wish to try and communicate a point of view that has played a very critical and fundamental role in my reasoning and hence mathematical exploration. A black hole is most typically described as being a point of infinite density whose gravitational pull is so strong that not even light itself cannot escape it. But what is it that we can actually say about it from inference?

From the point of view of Bohr’s model of the atom the vast majority of the volume inside an atom is empty space. Only around a billionth of the volume of an atom is actually occupied by the particles that make it up. The rest, is empty space. For example, if a hydrogen atom were the size of the Earth, then the proton at its centre would only have a diameter of about 200 meters.

In a White Dwarf the particles are packed together such that the volume previously occupied by electron orbits is removed. Further pressure forces the protons to absorb the electrons leaving only a collection of packed neutrons, thus forming a Neutron Star. Further pressure and a black hole is born where the logical conclusion becomes that all the neutrons have been forced to fuse with each other into a single particle. Hence the conclusion that a Black Hole is a Fundamental Particle. 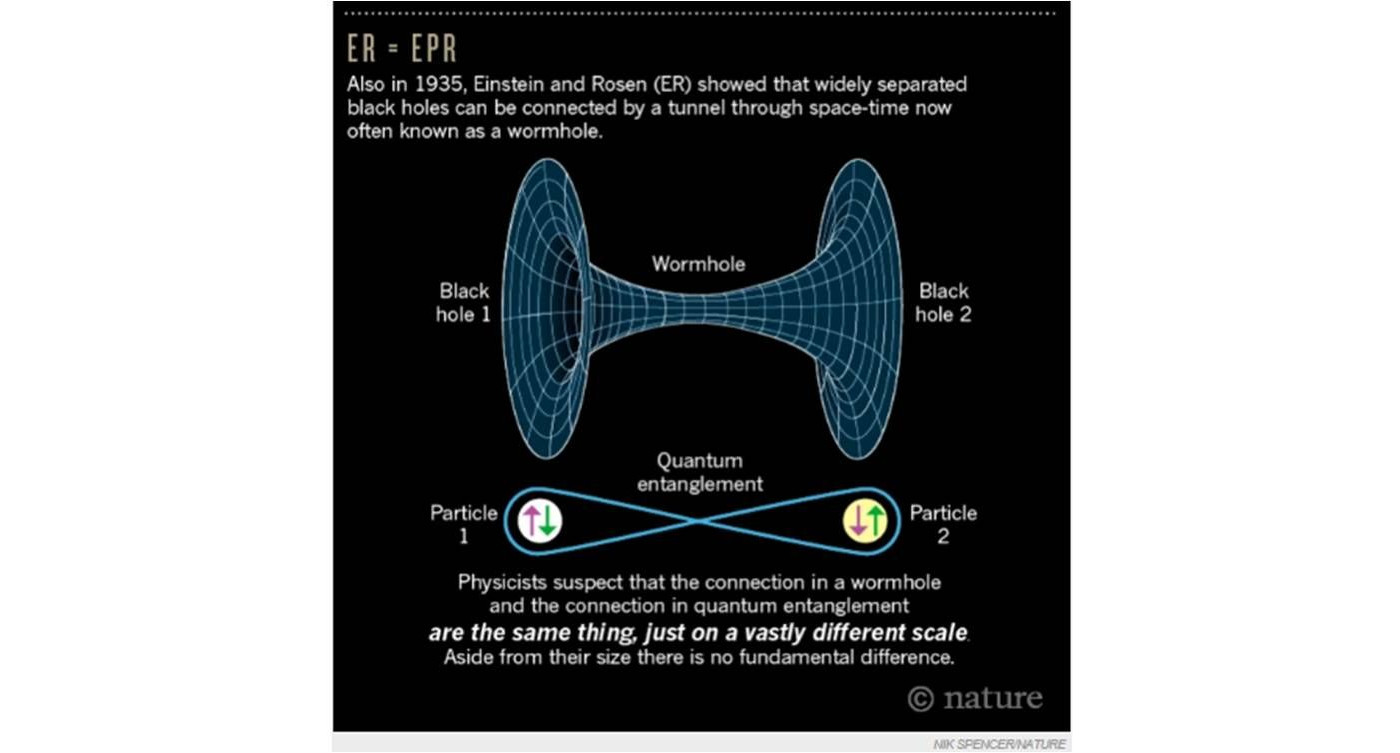 Self-similar patterns repeat themselves irrespective of scale. The importance of the ER=EPR conjecture is that the same mechanism of bridging spacetime is seen both at the scale of black holes and at the quantum scale between particles. Imagine if it were possible to bridge spacetime at the human scale and we would have the means to do interstellar travel.

The very idea, or notion, that a black hole is actually a fundamental particle of nature in and off itself could best be described as a nightmare of cognitive dissociation. I truly have known madness. “Heretical blasphemer” is the phrase that screams in my mind. But science is not religion! I myself would have outright rejected my own idea if it were not for the Einstein-Rosen bridge equals Einstein-Particle-Rosen bridge conjecture by Leonard Susskind and Juan Maldacena. [1]

The cognitive nightmare of madness in which the statement “a black hole is a fundamental particle” played a pivotal role that drove me to try and nullify this whole idea of mine. Instead of nullifying, rather I have amassed a massive portfolio of evidence from observations to lab results. In fact, I have tried in vain to test the logical predictions about my idea only to find that my very rough prediction, or hunch, maybe very real.

For me Aliens and UFOs were a taboo subject being sighted by a redneck in the outback. However when Naval fighter pilots and radar operators from a Nimitz class battlegroup start talking about them in serious tones then I listen. From my experience, these serving heroes do not make mistakes and physics has advanced to the point we can explain this. But I don’t just wish to explain I’m all in when it comes to us humans doing the exact same thing…. just that we got to figure it out. EP=EPR in conjunction with Martin Tajmar’s work shows the way.[1] [2] [3]

These days, I find that I am now very carefully listening to creditable UFO witnesses all the while screaming “I knew it, that’s how flying saucers work”. My jaw is on the floor at the sheer beauty and simplicity of these craft. We who think we have mastered the wheel, we have not! We are only just beginning!

But it is in this single idea, or rather change in perspective, with respect towards the problems of quantum mechanics and cosmology that was for me the great enabler. What is the difference between a black hole and an elementary particle? None, they are both incompressible and indivisible volumes of matter.

An Idea is Born

The Quest for the Holy Grail